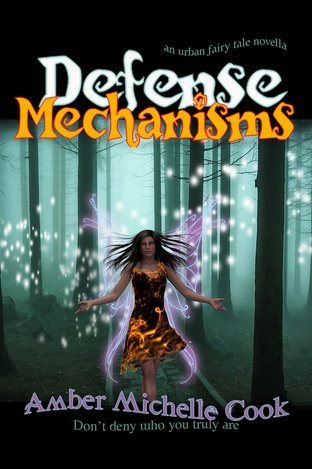 What if your deja vu was really flashes of a life running parallel to your own?

An imaginative child, Janey left childhood far behind as soon as older children and adults began to tease her for it, much to the disappointment of her younger brother.  On her thirtieth birthday, the first Pulse hits and drives them to seek shelter at his favorite hangout – a one-of-a-kind indoor playland for grown-ups called the Imaginarium.  When the place is attacked by urban looters, she becomes an unwilling 'defender of imagination.'

Raised within the confines of Tanglewood, a workshop-residence formed from the awakening of a grove of silver birch, Ozanne fled her family's unrelenting expectations for a life of frivolity and vanity at Court.  Upon the passing of a Wave that obstructs all but personal Glamour, she races back with her brother to protect it from the Foe, though certain she has little to offer.  Why then does he persist in looking to her to protect them?

Defense Mechanisms is a contemporary fairy tale of finding realistic, modern-day happy endings when the ways we learn to protect ourselves from other people's emotional sore spots, like ignorance and hate, keep us from being who we really are and finding our place in life.
___________ _  _   _    _

I couldn't wait to order my copy of "Defense Mechanisms" after reading Amber Cook's novella "What the Faeries Left Behind." The author has a unique, whimsical writing style that suits her stories, and both her books have left me eager for her next publication. I recommend "Defense Mechanisms" to anyone who enjoys letting their imagination run free!

This was a fun quick read, with amazing ability to sweep you up into the story. I like the concept of the dual worlds, and the idea of adult fun house where you can let your inner child out is a great concept. I also like the twist of it being a brother and sister combo for the main characters in the story. I also like that fae where a part of the story. Thanks for the fun read.

Amber Michelle Cook writes stories of deep, meaningful fun.  Partly raised in Germany, she went to an international school for high-school, majored in linguistics, loves literature and period pieces.  She's been improv writing for over a decade, is one of the team behind National Novel Editing Month and the Member Relations Chair of Communications and Marketing for the Northwest Independent Writers Association.
_______ _  _   _    _

Brin directed the late-night crew of the Imaginarium from a row of wide windows on the second floor, off a gallery of glass-encased rubber-band art that overlooked the looters.  Boxes of rubber bands, left out on craft tables for patrons to do-it-yourself, had been broken open and for a time dozens of stretch-and-release elastic missiles rained down on them.

At that distance, most the rubber shot bounced off harmlessly, so he’d moved on to trying other deterrents.  “Shine those flashlights in their eyes!”  Then, “Do we have any more ice water to dump on them?”

People were trying, but they were also scared.

Feeling useless just standing there, I recalled all the times I’d played protect the fort with Brin when we were kids, and how we’d always come up with these really serious plans for digging pits and rigging traps and luring the enemy away.  What good was any of that now?

So many ideas had been bandied about, but the plans either lacked key ingredients, were too lethal, or, like anything involving fire, would do more damage to the building than the looters.  Without phones or internet, we were on our own.  I set myself to inventory nearby rooms, mostly offices and other official-use spaces.

Some were locked, but not others.

The building’s old-fashioned generator provided some light in all the hallways and public spaces, ran ventilation and even the elevators.  My eyes were adjusting enough inside the rooms to be able to make out shapes and some color.

As I went, I pocketed the occasional small item I came across.  It was hard to think clearly so I allowed intuition to guide me rather than logic.  An old lighter, an unopened pack of gum, a tube of industrial-grade insta-glue--

The sound of glass breaking reached us.

I kept waiting to hear the vandals climbing in downstairs, but they were all too busy congratulating themselves on the destruction they’d caused.

“They’ll still have to get through the bars,” a shrill-voiced employee reminded everyone.  “And there are bars on all the ground floor windows.”

One of the hoods must have heard, because she sneered up at us, “Yeah, but that’s what crow bars and blow torches are for.”

Dismayed mutters and mumbled swearing swept the window ledges up here like a wave.

Jenna, a twentysomething with thick-rimmed, square-framed glasses and multi-color streaked hair, who Brin said put on the one-woman glow in the dark mime show on the weekends, whisper-called out to the rest of us, “We can get out to the gyroscope from here, if we climb across the balconies to the one off the Prism Playground.”

“I don’t know.  Maybe we could jump down into the net, and let ourselves down to the ground from there?  Then go for help,” she hissed back.  “When I signed on to stay, I had no idea we’d be dealing with these guys.”

“Got rope?  Or a ladder?” I heard Brin ask equally low.  “Cuz there’s nothing but unforgiving asphalt waiting for you two stories below.”

The second round of looters weren’t just opportunists, but a gang of determined youths, violence fueled by alcohol (and who knew what else).  Brin said they weren’t strangers, either.  All seven of them were regulars who had been kicked out of the Imaginarium for disruptive behavior and weren’t allowed in anymore.  That meant they had an axe to grind.  The police wouldn’t be coming any time soon—that was clear—so once these guys got in there would be no stopping them.

Some of the crew had already fled out a back way, and I couldn’t blame them.  I would have been one of them if it hadn’t meant leaving Brin behind.  But he was like one obsessed.

I felt this terrible vacuum.  All my education—and all my pride in my intelligence—was being no help at all.  I tried so hard to be clever.  I went from room to room thinking hard, but none of my ideas were even remotely feasible.

Another window cracked.  But that sound was nothing to hearing Brin call out to me, “Damn, Janey, they do have blowtorches.”

What seemed no more than a moment later, someone else cried, “Man, that was fast.  They’re cutting through the metal like butter.”

Frowning, I slowed to a stop.  It felt like this moment had happened before—but to a me who was now watching it happen to me all over again from a place of detachment.

The sensation struck hard, then left me dazed and even a bit shaken as everything else resumed its normal course and I heard the others arguing about what to do next.

I wanted to say something to the me who hadn’t experienced it already, maybe reassure her, but the more I looked at her, the more she became a stranger.  She felt disconcertingly different from me, but also strangely familiar like a dream you’ve dreamed repeatedly yet can barely remember.

Having no idea how much of this was due to the déjà vu and how much to repressing all the tension of our situation, I racked some degree of the delusion up to my imagination.  It was prone to running amok when I set it loose.  So normally I reined it in right away.

This time I found I actually didn’t mind.  After the initial reaction passed, I decided I liked the feel of her, like I’d created my own imaginary friend—as an adult.

The idea tickled me and all I could do was laugh.

The sound barely made it past my lips, but the escaped laughter left me feeling a little lighter and I left the room feeling a bit better.

I came out of the row of offices next to a snack shop.

From the doorway, I scanned the register, tables and chairs, vaguely amused by the sheer volume of slightly dusty old-fashioned plastic fruit hanging from the ceiling.  It smelled of fried food and industrial cleaners.  As I rushed into the kitchen-prep area, I heard people calling to one another to hide while Brin tried to rally them to stay.

Eyes sliding over thing after useless thing, they slicked over most everything until they landed on a restaurant-sized container of olive oil someone had opened and left standing on the counter, probably when the power first went out.  In my mind, a picture of the bad guys formed, slipping and sliding in the oil, and it made me laugh—more at myself than anything else.

But the more I thought of it, the more I liked it.  If they couldn’t get a grip, they couldn’t do much of anything.  One three liter container of olive oil wasn’t going to save us, and I almost left without it, but decided it would be better than nothing and grabbed the big metal canister with both hands, hurrying back to my brother trying not to slop.