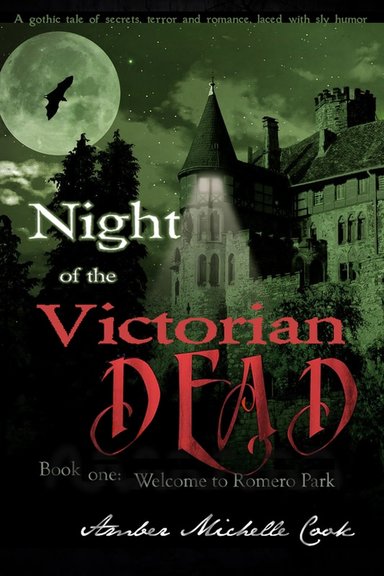 Night of the Victorian Dead, Book One:  Welcome to Romero Park﻿
by Amber Michelle Cook

﻿The unwitting attendees of a country ball are all too busy striving to hide secrets and make matches to see what’s going on around them until it’s almost too late!﻿

Among th﻿e green and rolling hills of Old England, the fields lie ripe for reaping under a blighted Harvest Moon.  While tenants and servants fear the eerie light, Mr. Dorchester invites several families of his acquaintance to his estate—for a visit culminating in a ball to celebrate his ward’s engagement to a most eligible neighbor.  Amid all the usual hopes and anticipation such an event inevitably excites:

–   The disillusioned host is desperate to seize his last chance for happiness,
–   His foreign ward struggles to pass herself off as a Blushing English Rose,
–   The governess pines for her employer and seeks to free him from blackmail,
–   The reclusive apothecary, working there under false pretenses, hides more than one secret,
–   A local beauty raised to marry well is awakening to her true character,
–   And a young gentleman is finding great satisfaction in playing the indispensable manservant.

All the while, signs of the dead rising are increasing until the entire household wakes in the middle of the night to a gut-wrenching scream inside the house.

It's the first novel of a trilogy, in which Downton Abbey meets the undead.

Where imagination and suspense reign over splatter-gore, and the knowing modern reader can enjoy accompanying unsuspecting characters down the road to the inevitable, while themselves encountering mysteries and unexpected twists along the way.