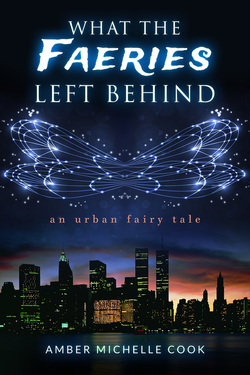 What the Faeries Left Behind
by Amber Michelle Cook

After coming home from a monotonous office job to the apartment where she lives alone, thirty-something Abigail Watson is having a tough day in a hard week in a rotten month, and don’t even get her started on the year.  Until that night when something wonderfully impossible shows up at her door and rings the bell insistently.

You’re not supposed to answer the door late at night to strangers who come knocking unannounced, right?

Right.  But Abigail does,

Because how can you be scared of someone with translucent wings like those of a dragonfly?

What the Faeries Left Behind is an urban fairy tale ‘antidote’ to those times when the dullness and drudgery of grown-up life seems inescapable, and to the misconception that wonder and play are just for children.

Highly Recommended. This book is something out of the ordinary, and it is written in a humorous way that will appeal to a wide audience.

Amber Michelle Cook writes stories of deep, meaningful fun.  Partly raised in Germany, she went to an international school for high-school, majored in linguistics, loves literature and period pieces.  She's been improv writing for over a decade, is one of the team behind National Novel Editing Month and the Member Relations Chair of Communications and Marketing for the Northwest Independent Writers Association.

“Why are there all these toys in my bag?”  I poked around inside searching for the water bottle I had added at the last minute, but the clear plastic bottle had long since been buried under an avalanche of smaller items:  miniature slinkies, hologram stickers, bubblegum, colorful little rubber bouncy balls, trick candles, plastic whistles, kazoos and harmonicas, sidewalk chalk, water balloons, glo sticks, sparklers—to name the ones I could identify.

With a pretty little pout the creature responded, “First of all, it’s my bag, I made it.”

The Fey looked so much more human now, I wondered whether It had changed that much, or if the difference lay mostly in the eye of the beholder.  Glaring back at me with undisguised pique It added, “And second of all, they’re not just toys.”

We had reached a park somewhere in the northeast part of town, one I had never been to before.  The place was deserted except for the two of us and some loose debris that blew around on the paved paths whenever the wind shifted.  Sodium streetlights from the road reached a ways in, but beyond that it had been fairly dark until my eyes adjusted.  After a quiet stroll deeper into the park that felt more meandering than purposeful, we had come across an artificial lake rimmed with picnic tables and I plopped down at one, meaning to get some real answers after a quick drink of water.  But now I held up a package of small plastic containers, each one a bright primary color, all shrink-wrapped together.

“Wonder in a bottle,” It informed me with brisk reverence.

I wasn’t sure what to make of that until It reached over to where I sat—further than It should have been able to—liberated the six-pack from my grasp and set the whole thing down on the picnic table.  It opened up one of the individual bottles, took out the wand, let the extra solution drip down off the bottom for a moment, and then held the wand up and blew gently into the little plastic circle on the end.

A stream of small soap bubbles trailed out, followed by still more of them when the creature breathed out again.

They eventually began to sink, a disinterested nod to gravity rather than in full obedience with the law, but then a few of them changed their minds and took up with an unseen updraft to float lazily around us and climb higher and higher, soon to be lost in the night.

I watched the bubbles swirl around each other, and, looking closer, I observed rainbow colors swirl around the outside of all the bubbles.  For the first time I noticed how you could see the soap solution on the surface of each bubble, the super thin layer of fluid in constant motion, which started out all colors, but then quickly one color became dominant.  From there that color swiftly shifted to another color as the bubble solution evaporated and thinned—cycling from one end of the spectrum to the other, in the same order each time even if at different speeds—before becoming almost monochromatic and then popping.

I saw in that moment a whole world of delight and animation I seldom experience anymore.

And knowing what I know now as an adult, about physics and chemistry, about things like humidity and surface tension, didn’t detract from the wonder at all—they added new dimensions to the experience.

Blowing bubbles exposed the unseen air currents, the amount of moisture in the air.  They looked different, but just as beautiful at night as in the sunshine of a summer’s day.

“You can’t get this stuff at home.”

“Huh,” I replied, only half listening.

If It wanted me to pay attention, It shouldn’t have blown more bubbles before It spoke.  Some of them zipped right out over the lake and landed on the water, where instead of popping, they formed little half-domes on the surface and rode out the breeze clinging to the gentle waves.

“We can’t even figure out how to make the solution.  Neither Court can.”

“Dish soap and water,” I muttered while watching a bubble land in the grass and sit there, not popping, colors spiraling madly around the exterior shell of that fragile, little sphere made mostly of air until all the color was gone and what remained was almost a ghost of a bubble.  When it went it didn’t pop, but sort of…disappeared.

“Not in the Realm.  Doesn’t work there.”

“Come on?  You’re serious?  Can’t you just…fashion them out of glamour—”

“No one knows why there are marvels here we don’t have.  Some theologians insist that when we drove the Drab One out of our world, it left a slimy trail on certain things and deadened them for us out of spite.”

I might have said something to that, but before I was able to formulate any intelligent thoughts, It blew another big round of bubbles, and they came back when the wind changed direction, dancing crazily about us, making me laugh.

It continued blithely, “Who knows?  It’s one of those great questions probably, like why are we here?  And why don’t we die?” 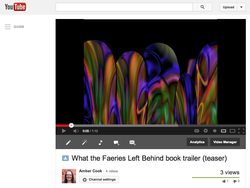 Looking for something fun to watch?
Watch the What the Faeries Left Behind book trailer teaser on YouTube!